Thanks to the auspices of our friends at MIT, App Inventor continues to thrive and help people learn how to develop mobile applications.

There is a learning curve to creating applications for the android phone.  It is suggested by Mark Friedman that one first starts with App Inventor, the Gui interface.  If one knows some JAVA then one can use move onto the Bridge, which allows one to use Java and app inventor components.  And lastly use Android more advanced framework for developing more advanced topics.

App Inventor in Education - this is a google group of educators who are using App Inventor in their classrooms or programs to share ideas and teaching resources.

App Inventor for Android site - this site was developed by  Professor David Wolber of the University of San Francisco.  It creates tutorials and videos about working with App inventor. 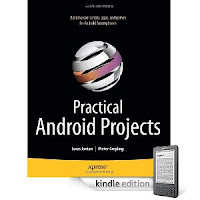 The book covers architecture such as the platform stack, working with IDEs such as Eclipse or NetBeans.  Note: NetBeans has more student friendly and easy to use qualities for getting started with Java and Android development (p33).

Java is essential to learning Android development and it seems some level of Java programming will be needed in order to make full use of the materials in this book.  Also skills building and running the IDE and the Android emulator are assumed.

This book also covers the use of cocoa.basic and a CocoaDroid Project with sample scripts, the use of embedding Lua scripting language (which is written in Java - the Kahula2 implementation version),  used for custom scripts and prototyping.  Also covered is the SL4A (also known as ASE - Android Scripting Environment) scripting layer for Android used to run your own scripts written in high level languages (p193).

In addition HTML / Javascript and Air are discussed for the creation of GUIs dealing with graphics and animation.  Also REST with the Facebook and Twitter APIs and the use of the Google App engine, Game development graphics and animation, along with an explanation of the Drawable Class which is used to facilitate the rendering of content (p.328).

And lastly the book covers the installation, usage and limitations of the API Inventor tool, which allows inexperienced users to to drag and drop components without having to know any code (p.361).